The fall of Lehman Brothers 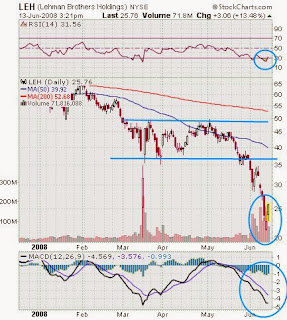 The fall of Lehman Brothers
The Lehman Brothers Holding Inc- America's 4th largest investment management firm, a 158+ year old company, a mass researcher, a bulge bracket firm...
Looking at the things said above, can u think that it'll crash one day... Probably i didnt thought, once in my life , i thought of working in a company like LEHMAN BROTHERS, JP MORGAN and other Bulge bracket US giants. Need to rethink i guess...
If i talk about the management, it ws being headed by smartest blend of ppl, i dont think , management can be the only factor for BANKRUPTCY...
LEHMAN BROTHERS kind of firms dont fall in a single day, due to a single reason , there are various things that help in pricking the baloon.

The giant investment bank basically fell to the sub-prime mortgage crisis that has rocked the United States and the global economy. Lehman was strangled by a massive credit crisis and fast plummeting real estate prices.

The  $60 billion loss in bad real estate loans forced the bank to file for bankruptcy.

LEHMAN BROTHERS started cotton trade in US before the American Civil War and used to finance the railroad that built a nation, has been worsely hit by a large dose of :

Lehman's collapse was also triggered by refusal of other banks to do business with it because of its complex ways of trading. Housing loans made by the bank to people with little support made these loans very risky, and when interest rates rose, these borrowers could no more repay Lehman. This led to huge losses.

Lehman Bros had never reported a quarterly loss till 2008 JUNE. This has not been the first set of crisis for it,it had earlier survived many an economic crises, like railroad bankruptcies of the 1800s, the Great Depression in the 1930s, and the collapse of Long-Term Capital Management in the 1990s.

Thus the collapse of the giant investment bank came as a major shock for the entire world markets that plunged after Lehman filed a Chapter 11 petition with US Bankruptcy Court in Manhattan.

What is this Sub Prime Crisis???? Has it been a silent killer?

The crisis have got their origin from Subprime loans:

What is a sub-prime loan?

as ‘sub-prime’, meaning their track record in repaying loans has been below par. Loans given to sub-prime borrowers.

Why loans were given?

In roughly five years leading up to 2007, many banks started giving loans to sub-prime borrowers.

They did so because they believed that the real estate boom, which had more than doubled home prices in the US since 1997, would allow even people with dodgy credit backgrounds to repay on the loans they were taking to buy or build homes.

Government also encouraged lenders to lend to sub-prime borrowers, arguing that this would help even the poor and young to buy houses.

How did this turn into a crisis?

The housing boom in the US started fading out in 2007.

One major reason was that the boom had led to a massive increase in the supply of housing. Thus house prices started falling. This increased the default rate among subprime borrowers, many of whom were no longer able or willing to pay through their nose to buy a house that was declining in value.

How are we Indians affected?

The fall of two global financial behemoths -- Lehman Brothers and Merrill Lynch -- is expected to affect India Inc's ability to raise resources via the equity route.

While the public issue market has already dried up, the private equity funds are also becoming conservative in terms of pricing. This is resulting in  delays in concluding deals or transactions being called off.

The crisis faced by Merrill Lynch and Lehman Brothers is expected to have a cascading effect on PE firms too.

I feel that US crisis are CRY SYS.... CRYING SYSTEMATICALLY...  for the global World, it is a beginning to new end, sooner or later markets will face US tune, though INDIANS have a diversified market profile, they wont face a scary effect, still US is a giant, any fall in giant will affect us.

INDIA's  trade with US is a strength for India, so every strategy in INDIA has to be finalized keepin in mind the crisis.. SORRY CRY SYS

Ankit Gupta said…
Thanks for posting so nice comments Samriti and Mukun ji...

ANKUR said…
well ankit it was really a good piece of information thanks..!!

Ankit Gupta said…
Well i have an opinion similar to FEDERAL BANK's opinion, it cant completely end the crisis.. definitely it is going to mitigate some worries...

August 08, 2020
My experiences with this gloomy world continue. I may sound repetitive and annoying, but there's a reality check for all of us who think that the world is fine as long as the Covid-19 doesn't hit us and our paychecks continue to flow into the banks.
The store in the picture is amongst the busiest in the area, always remains full and explodes with the people on the Saturdays. A typical brand in a store, let's say a Van Heusen makes about ₹200,000 to ₹220,000 of sales on the weekend. As of today, the store does about ₹10,000 to ₹15,000 of revenues of the same brand, and the footfalls are not even 5 per cent of what they otherwise used to witness. Ironically, a store of this size would have 8-10 salesman with an average basic salary of ₹10,000 to ₹12,000 a month and the balance they earn (~₹5,000-₹7,500) is all linked to the sales of the brand. For them, purchases from the store cover-up for the livelihood, savings and the investments and there are no concept of "work fr…
1 comment
Read more

December 25, 2019
I don't know who I should credit or discredit, but last couple of years have been incredible for India and it's people and it is not in a good way. Disappointed to note that the politics has completely taken over us and the ideological differences have reached our houses and personal devices. We are not only fighting amongst us on difference of opinion, but also ensuring that the dissent against a majoritarian view is killed to its core, to the extent that the voice is never raised against any impending thoughts or disagreements we may have.
I am deeply saddened by the fact that most of us now are actually made to believe that the opinion shared by a larger section of society is deemed right since it has the weight of a the population around, and in case you have reservations to even contest that, you are probably branded as a threat.
I may have had little problems with CAA or NRC if it wasn't done for the political incentives and the treatment of the people not sharing th…
Post a Comment
Read more

January 07, 2013
In hearing multiple voices and persuading people all the day, sometimes you fail to listen your own inner voice which is seeking your support...
Sent from my BlackBerry® on the go
35 comments
Read more