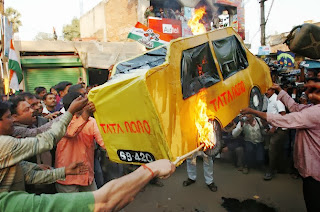 Taking on Singur Tata Curry
West Bengal government’s decision to acquire land in Singur for a car factory has drawn much argument from various sectors leading to widespread violence.
SINGUR, a small town in Hoogly district of West Bengal is in the news for a little more than a year now. With a population of over 20,000 and a literacy rate of nearly 80 per cent, which is much higher than the national average, the ruling party found it quite tough to handle the  situation when the residents going against the land acquisition, which was to be used for a car-manufacturing unit.
It may be mentioned that CPI (M), the ruling party in the state had acquired 997 acres of multi crop land required for a car factory to be constructed by TATA motors for the much awaited 1 lac tag vehicle NANO.
The acquisition has drawn huge protests from opposition parties who want to grab every opportunity provided by the situation and the farmers in general, who are worried about losing their land and procuring the next meal for themselves and their families.
Argument of the ruling party:
The ruling party has its argument well in place.
Reaction of the opposition:
Violence:
Expected and desired outcome:
The Unexpected would be Truth:

Who says that the expectations are always met...
Its a complete mess now, The TATAs have warned many times, and now they are on the verge to quit.
They are looking for various alternatives, its too difficult to make such turns , but TATA is ready to turnaround.
Sources in the West Bengal government's finance department have argued that  the state had made budgetary provisions that would run into several hundred crores every year for 20 to 30 years to attract Tata Motors'  Nano project to Singur.
This payout was to begin from the scheduled start of the production in 2008.
The project is now facing problems owing to protests by land-losers unwilling to compensation from the government.

At the end of 2006, the state government had disbursed the first part of its support to Tata Motors in the form of a soft loan of Rs 200 crore at an interest of 1 per cent per year repayable in five equal annual instalments from the 21st year from disbursement of the loan, entailing a lock-up of the capital and loss of interest income on the amount for the entire tenure.

At a simple rate of 12 per cent a year, the interest subsidy would cost the state about Rs 25 crore a year...
Its not the TATAs alone who have been hurt, in this turmoil, the Govt has suffered too..

August 08, 2020
My experiences with this gloomy world continue. I may sound repetitive and annoying, but there's a reality check for all of us who think that the world is fine as long as the Covid-19 doesn't hit us and our paychecks continue to flow into the banks.
The store in the picture is amongst the busiest in the area, always remains full and explodes with the people on the Saturdays. A typical brand in a store, let's say a Van Heusen makes about ₹200,000 to ₹220,000 of sales on the weekend. As of today, the store does about ₹10,000 to ₹15,000 of revenues of the same brand, and the footfalls are not even 5 per cent of what they otherwise used to witness. Ironically, a store of this size would have 8-10 salesman with an average basic salary of ₹10,000 to ₹12,000 a month and the balance they earn (~₹5,000-₹7,500) is all linked to the sales of the brand. For them, purchases from the store cover-up for the livelihood, savings and the investments and there are no concept of "work fr…
1 comment
Read more

December 25, 2019
I don't know who I should credit or discredit, but last couple of years have been incredible for India and it's people and it is not in a good way. Disappointed to note that the politics has completely taken over us and the ideological differences have reached our houses and personal devices. We are not only fighting amongst us on difference of opinion, but also ensuring that the dissent against a majoritarian view is killed to its core, to the extent that the voice is never raised against any impending thoughts or disagreements we may have.
I am deeply saddened by the fact that most of us now are actually made to believe that the opinion shared by a larger section of society is deemed right since it has the weight of a the population around, and in case you have reservations to even contest that, you are probably branded as a threat.
I may have had little problems with CAA or NRC if it wasn't done for the political incentives and the treatment of the people not sharing th…
Post a Comment
Read more

January 07, 2013
In hearing multiple voices and persuading people all the day, sometimes you fail to listen your own inner voice which is seeking your support...
Sent from my BlackBerry® on the go
35 comments
Read more